Back in May 2013, I tried my hand at redesigning the Partick Thistle Football Club badge. I wrote,

‘I actually think the current crest is very strong, but I experimented with trying to tie a bit more history into it. Being that Partick Thistle has actually played in Maryhill (as opposed to Partick) since 1909, I wanted to find a way to acknowledge their mixed history by blending elements of both the Partick and Maryhill coats of arms in order to form the crest centrepiece. But that design proved too busy (it might be able to be retooled later). So for Partick Thistle I simply changed the typeface and added a few rings to frame the crest better…’

Truth be told, I was never content with the redesign because it wasn’t much a redesign at all. So I revisited the badge (something I hope to do with some other Scottish Premiership badges in the near future) and came up with something very different: 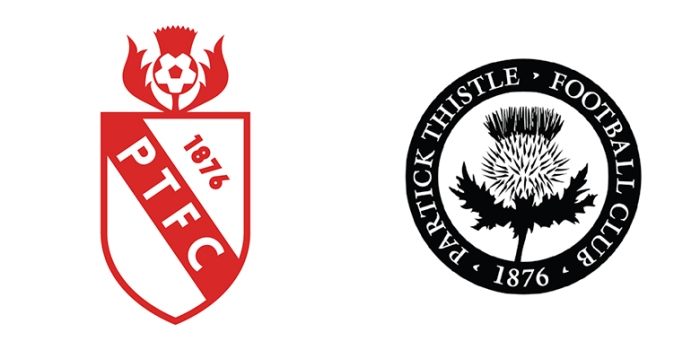 I decided to add a more stylised thistle atop a traditional shield. It’s something like a throwback to 1970s style and I find it different enough to satisfy me.