In 1902, the top tier of the Scottish Football League expanded from 10 to 12 clubs, which opened two vacancies in the second tier. These went to Raith Rovers and Falkirk. After only three seasons, the Bairns were promoted to the top flight.

The club boasts such honours as two Scottish Cup victories (1912/13 and 1956/57) in five appearances, as well as the somewhat dubious honour of having won the Scottish Challenge Cup—a competition open only to clubs that do not play in the top tier—a record-tying four times (an honour shared with St Johnstone).

More recently, as a result of reaching the final of the 2008/09 Scottish Cup, Falkirk competed in the inaugural UEFA Europa League competition in the 2009/10 season. Despite tasting European competition for the first time, Falkirk was relegated from the top tier of the Scottish Professional Football League by the end of the season. The Bairns competed in the second tier until the end of the 2018/19 season, when the club was relegated to League One (the third tier) after finishing at the bottom of the table.

Some of Falkirk’s early shirts featured what may or may not be Masonic crosses as badges, but the club did not feature a regular badge until 1909, when a crest was utilised. This crest was based on the coat of arms of the burgh of Falkirk and featured a crowned lion supporting a shield which bore the coat of arms of the Callendar family, who long held a seat of power in Falkirk. The Falkirk shirt bore two other badges before 1974, when a variation of the current badge first appeared. This badge features a football bearing a highly-stylised silhouette of the Falkirk Town Steeple. With the exception of the 2007/08 season, the steeple-fronted football has remained the primary badge for the club.

Falkirk’s badge redesign is one with which I have wrestled for a time. Because of the effectiveness of this 1974 badge, I found it very difficult to depart from the steeple image. Despite this, given that the depiction of the steeple on the current badge in no way resembles the actual Falkirk Town Steeple, and because I don’t find the steeple particularly inspiring as far as what might be affected in the viewer from a more realistic rendering, I decided to do away with the steeple image all together – no doubt, a very controversial move to Falkirk supporters. Instead, I opted for something more in line with the traditional heraldry associated with the town and club.

The shape of the central shield is inspired by the shield that enclosed the steeple badge on the Falkirk strip from 2010 to 2013. The image in the shield is a depiction of the Callendar family coat of arms, used in the Falkirk coat of arms and similar to what was used in the original 1909 badge. This shows two sets of three billets (sheets of paper), divided by an embattled bend (a normal bend would appear as a solid ribbon running diagonally across a shield), representing the Antonine Wall (built by the Romans between 142 and c.154), which passed through the town. Within the bend we find two sets of shields and swords. These represent two significant battles in Falkirk history: King Edward I of England’s defeat of Sir William Wallace in 1298 and the Jacobite victory over the Hanoverian army in 1746. Between the two is a church, the ‘Fa’ Kirk’ (which may mean either ‘the speckled church’ or the ‘church by the wall’) from which the town gets its name.

The kits are built on traditional Falkirk colour schemes. The home kit is inspired specifically by the 1937/38 home kit. 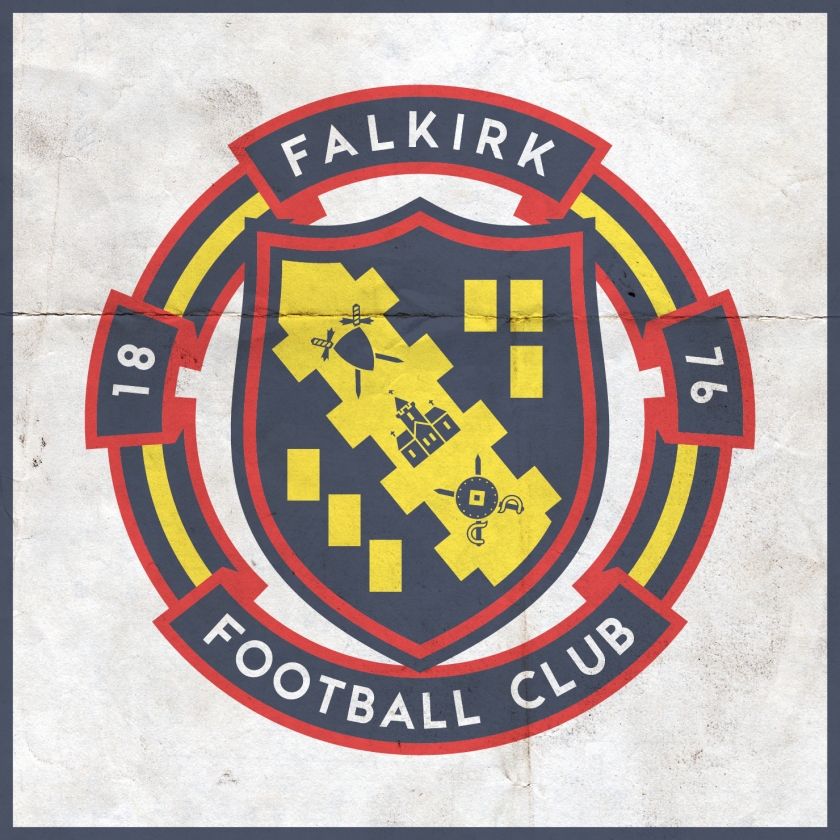