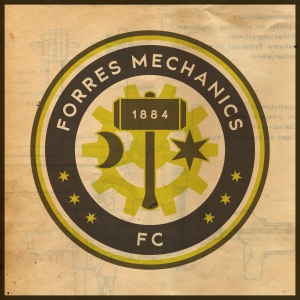 A more likely explanation is found in the research of Colin G. Watson. In his 1984 book, Forres Mechanics: The First Hundred Years, Watson argues that the club was formed when players left a pre-existing club based in the town, St Lawrence (now, a cricket club exclusively). Watson also argues that the name ‘Mechanics’ has nothing to do with the Mechanics Institute, but rather, is a reference to the occupations of these early players.

The Mechanics’ honours include two Highland League titles, seven Highland League Cups, eight North of Scotland Cups and the 1963/64 Scottish Qualifying Cup (North). In 2016, the Mechanics qualified for the Scottish Cup competition and reached the third round—their highest ever advancement in the tournament—where they lost to League One side Stenhousemuir over two legs (having drawn the first 2-2 at home).

The current Forres Mechanics badge is distinctive. Its centrepiece is a version of the Forres coat of arms, which originates from at least the fifteenth century. It features the town’s patron saint, St Lawrence, standing between two victory palms. He holds the Gospels as well as a gridiron, upon which he met his martyrdom. It is most likely that the crescent and star relate to a paraphrase of Psalm 139.12 associated with Lawrence: ‘The darkness is no darkness to me, but the night is all as clear as the morning that shineth more and more unto the perfect day.’

I have great affection for the current badge, but in my redesign I wanted to present something that was not simply a version of the town’s coat of arms. In wishing to tie in both the town and the ‘mechanics’ side of the club’s name and history, I included the crescent and star of St Lawrence, which are flanking a hammer, all set in front of a cog. Upon the head of the hammer is found the year of the club’s founding. I have also included three six-pointed stars on either side of the outer ring, calling back to the current badge. For the primary colour scheme, I utilised the club’s traditional gold and brown.

The kit designs were made in keeping with the club’s traditional colours and occasional use of hoops, both of which I find particularly attractive.