The club experienced its share of ups and downs over the comings decades. In 1932, East Stirlingshire finished the season at the top of the table, sharing the position with St Johnstone. Thanks to the Shire’s superior goal difference, they gained promotion to the top tier of Scottish football for the first time. Unfortunately, this spell would last only one season.

When the Second World War broke out in 1939, the league was suspended. After the war, the Shire was not permitted to return to the second tier. Alongside a number of other small clubs, East Stirlingshire competed in the new third tier. At various points, the Shire gained promotion to and were relegated from the second tier, but it was not until the 1963/64 season that the club competed in the top tier for a second time. As with their previous spell, they lasted only one season before relegation.

Although East Stirlingshire’s league performances have proven unremarkable, they have experienced moderate success in cup competitions, reaching the quarter-finals of the Scottish Cup on three occasions, most recently, in the 1980/81 competition. In that quarter-final, the Shire lost with a respectable 2-0 to cup-holders and eventual top tier champions Celtic.

At the end of the 2015/16 season, East Stirlingshire gained the dubious distinction of being the first club to have lost their place in the Scottish Professional Football League as a result of a play-off, relinquishing their place to the Lowland Football League champions, Edinburgh City 2-1 over two legs. Since that time, the Shire have competed in the Lowland League.

A version of East Stirlingshire’s current badge was first used in 1987. This first version incorporated orange as an accent colour, which first featured in the club’s 1980 badge. For my redesign, I have chosen to make use of the orange accent, which I find striking alongside the black and white. The roundel and the shield design call back to the 1980 badge, which I find particularly handsome. The two stars in the roundel call back to the old Stirlingshire coat of arms and depict two rowels (the spiked discs at the end of spurs).

For the home kit redesign, I went with East Stirlingshire’s traditional black and white hoops (used in the vast majority of the club’s home kits from 1883 onward). The red socks first featured in 1946 and have been used often ever since. The home kit also features a 1970s-styled collar. The away kit makes use of the orange accent. The shorts for both kits feature only the central portion of the redesigned badge. 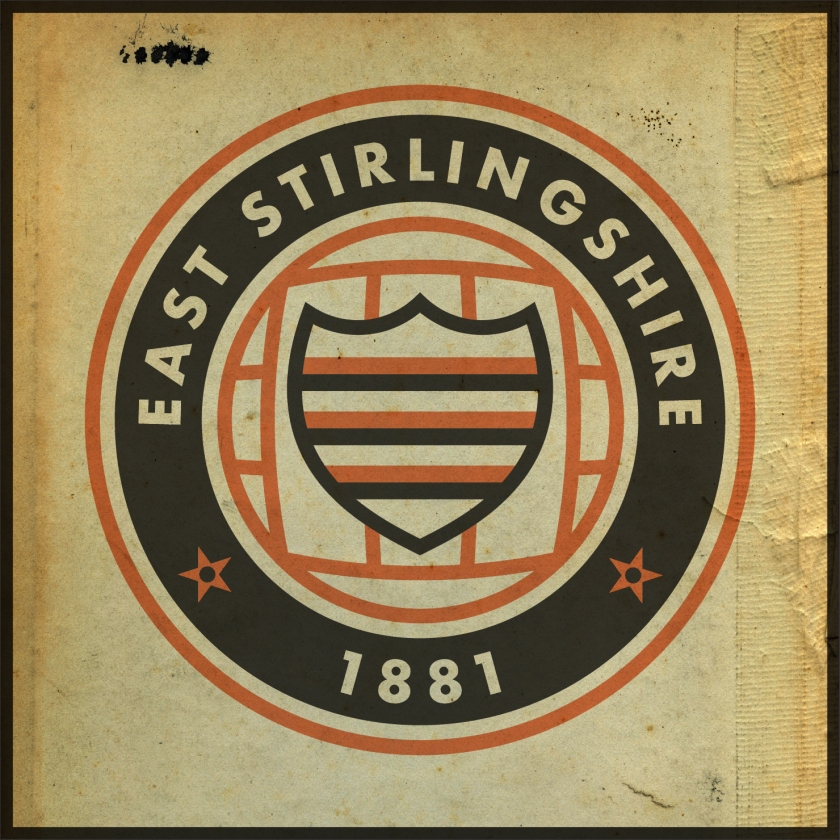