Keith Football Club was established in 1910 in the small Banffshire town from which it gets its name. The club competed on a junior level until it was admitted into the Highland Football League in 1924.

Throughout their history, Keith have experienced sporadic regional success. They have won the Highland Football League on seven occasions, including three consecutive seasons, between 1979 and 1981. The club boast ten Highland League Cups, including another span of three consecutive victories between 1974 and 1976. Keith have also been Aberdeenshire Cup holders on eight occasions and have won the Scottish Qualifying Cup (North) four times. But the club’s experience of the Scottish Cup might leave a bad taste in some supporters’ mouths, with a notable 1-10 defeat to Rangers in the 1995/96 Scottish Cup, which drew national attention for all the wrong reasons.

The current Keith badge is what I would describe as, ‘nothing to look at’. Not only does it violate ancient Scottish heraldic laws, but it also features the club’s initials, which is unfortunate due to their sharing of these initials with a more famous institution. For my redesign, I have decided to incorporate the symbols found in the Keith coat of arms. The first, in the upper-left position, symbolises the ancient Kirkton of Keith and the historical tenure of the Lordship of Regality, the land upon which the town of Keith is located. This Regality—granted by King William I, or ‘William the Lion’, who reigned from 1165 to 1214—was held by the Cistercian Abbey of Kinloss. As a result, this part of Keith’s history is represented by the Cistercian Order’s blue field with fleur-de-lys.

The upper-right position features a crowned lion from the Ogilvy coat of arms. This represents James Ogilvy, 5th Earl of Findlater and 2nd Earl of Seafield, and Fife, who united and enlarged the communities of Old and New Keith to form the settlement of Keith in 1750. The bottom position features a shell which represents the Duff coat of arms, also relating to James Ogilvy. These symbols have all been adapted to the colour scheme of Keith FC and are enclosed within a circle, indicating the club’s name and year of foundation. 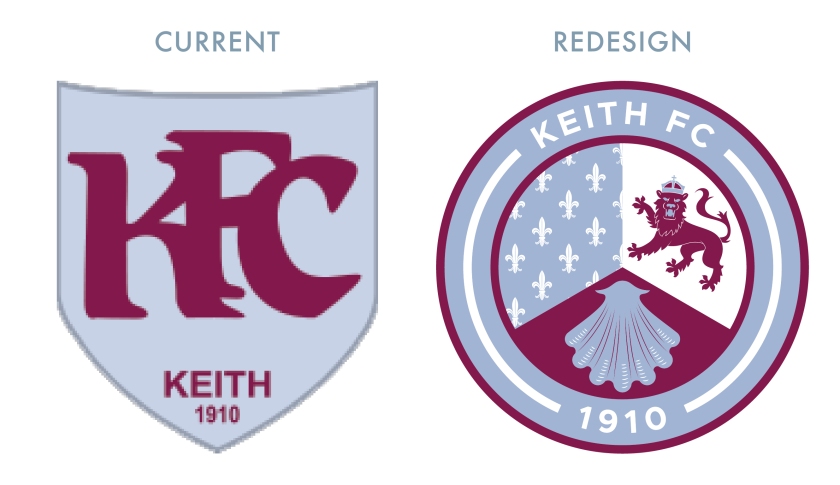 As the club has used their signature maroon home strip for many years—this giving the club its nickname, ‘the Maroons’—I decided to use maroon as the primary colour of the home strip, highlighted with light blue vertical stripes and accents. The away strip is again dominated by maroon and has white accents. 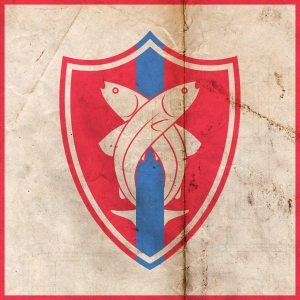 Deveronvale Football Club was established in 1938 at the union of two pre-existing clubs, Deveron Valley and Banff Rovers. The club name comes from the River Deveron, which separates the twin fishing towns of Banff and Macduff on the northern Aberdeenshire coast.

The name ‘Deveronvale’ was chosen so as to demonstrate that the club belonged to the communities of both Banff and Macduff. The current badge is a version of the first and only badge worn by the club, first employed in the 1970s. In order to further emphasise this shared ‘ownership’ of the club, the designer, local schoolteacher Chris Murray, decided upon a depiction of a seagull in order to avoid favouring one town over the other.

A year after the union, the club joined the Highland Football League, though it was not until 2003 that they won their first Highland League title. This achievement was repeated three years later. In addition to these two Highland League championships, Vale’s honours include eight Aberdeenshire Cups, two Aberdeenshire Shields and secured their place in the Scottish Cup tournaments of 1951/52 and 2001/02 by winning the Scottish Qualifying Cup (North) during those campaigns.

Designing a new badge for Vale was a challenge. The current badge is both unique to Scotland in its shape (it resembles Liverpool FC’s full badge very closely, especially the badge first included on Liverpool’s 1987/88 kits) and striking in its aesthetics and simplicity. But, although the centrepiece of the current badge is meant to be a seagull, I find it difficult to see – a Native American thunderbird or an eagle comes to my mind more readily.

Ultimately, I chose to reuse the current badge shape. In order to emphasise both the River Deveron and the twin fishing towns of Banff and Macduff, I placed a blue stripe through the middle of the badge, crossed by two fish (salmon). The salmon coming from the left crosses in front of the salmon coming from the right, emphasising that, while Deveronvale belongs to both Banff and Macduff, the town on the western bank of the River Deveron, Banff, has always been home to Deveronvale’s home ground.

The kit redesigns make use of traditional Deveronvale home and away colour schemes.

The early history of Buckie Thistle Football Club is something of a mystery. Although the exact year of the club’s founding is unknown, it is accepted generally to have been established in 1889. The club’s green-and-white hooped home shirts resemble that of Celtic FC, and it has been suggested that Buckie Thistle might have adopted the scheme after receiving a donation of Celtic strips at some point in their history. The date of the adoption of the hoops is potentially intriguing as Celtic did not incorporate their now-famous hoops until 1903. Could the Jags have inspired Celtic? Probably not. But the uncertainty of Buckie Thistle’s beginning does not detract from the club’s illustrious Highland Football League honours.

Since joining the Highland League in 1909, the Jags are eleven-time league champions (most recently, in 2016/17), eight-time Highland League Cup winners, and have won a large number of other regional honours. In October 1954, Buckie Thistle beat Queen’s Park 2-1 at Hampden Park in a replay of the fourth round of the Scottish Cup, becoming the first and only senior non-league club to have won a competitive match at Scotland’s national stadium.

I have been unable to determine how long some version of the current badge has been in use, and while I would tend away from stereotypical Scottish symbols wherever possible, the Saltire and thistle seem wholly appropriate for the Highland Jags, as it does with Partick Thistle, Inverness Caledonian Thistle and fellow Highland Leaguers Strathspey Thistle. The design of the current badge seems dated (specifically, very 1990s in style), so I decided to reincorporate most of the current badge’s visual elements with a new, simpler design. 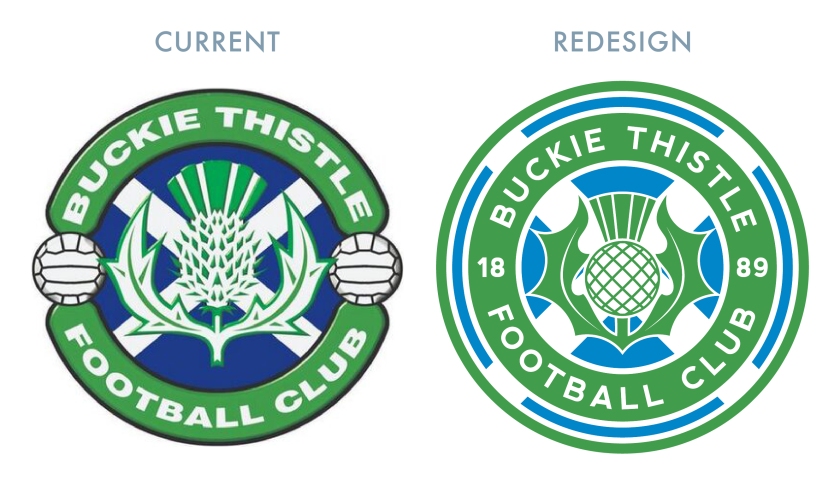 While seeking to differentiate the home kit from that of Celtic, and with no intention of getting rid of the hoops associated with Buckie Thistle, I went with a subtle variation of using tight hoops in a cooler shade of green, complete with green details (Celtic’s are normally white) and green shorts (never worn by Celtic at home). The away strip makes use of vertical stripes of black and grey as well as some green details. 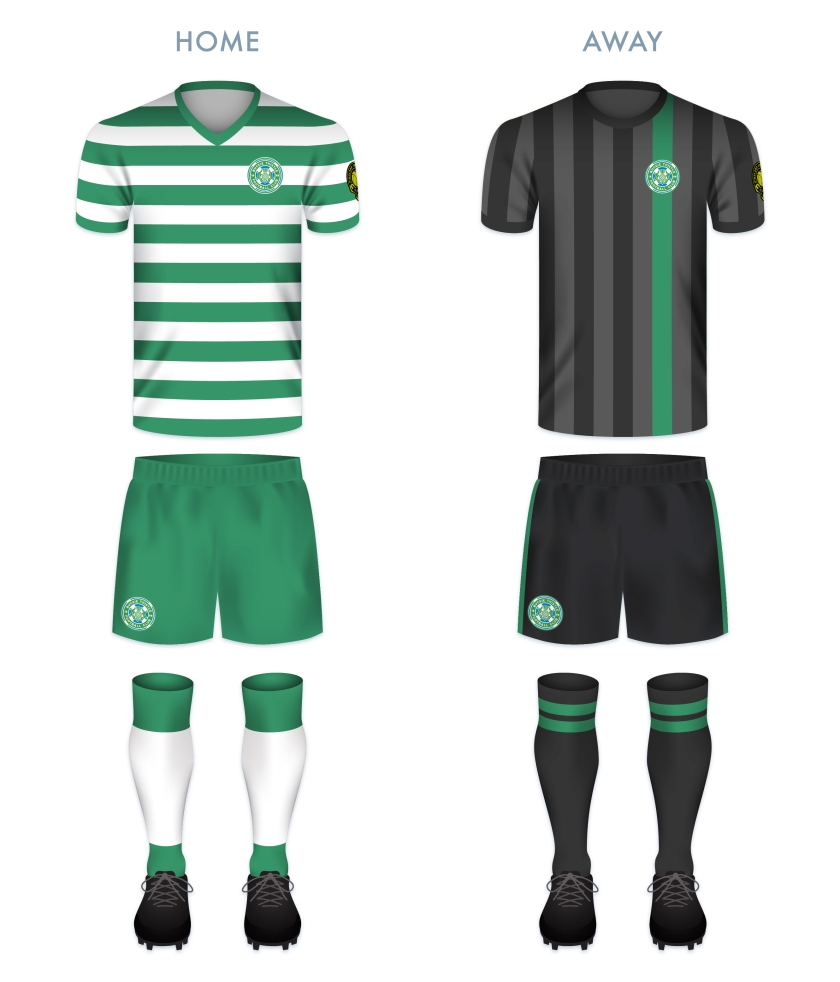