Dingwall-based Ross County Football Club were formed in 1929. Although the club was not admitted into the Scottish Football League until 1994, County has a long history of faring well against league sides in early rounds of the Scottish Cup while members of the Highland Football League. Since entering the SFL (and later Scottish Professional Football League), County have worked their way up the ranks. They reached their only Scottish Cup final in 2009/10, though they lost 3-0 to Dundee United.

In 2013, County reached the top tier for the first time in their 80+ year history. That season was an anomaly as Rangers had been booted down to the SFL Third Division (now the Scottish League Two) after a series of administrative issues, thus opening the door for the promotion of two second tier clubs.  The second club, Dundee, did not fare well, and like Dunfermline Athletic of the 2011/12 season, Hamilton Academical of the 2010/11 season and many other newly promoted clubs, Dundee was relegated back to the second tier after only one season in the top. The same was not so for Ross County, who ended the 2012/13 season in the fifth spot on the table, just one point behind their Highland rivals, Inverness Caledonian Thistle.

In January 2016, County beat Celtic 3-1 in the 2015/16 Scottish League Cup semi-final, securing a spot against Hibernian in the final. On 13 March, Ross County earned their first professional cup with a 2-1 win against Hibs. But their fortunes didn’t last forever. County finished the 2017/18 season at the bottom of the Premiership table and were relegated to the second tier. Fortunately, their stay in the second tier came to an end at the end of the 2018/19 season, when County finished top of the Championship table and gained promotion back to the Premiership.

While I appreciate the minimalism of the current badge, in use since 1990, for my redesign, I decided to capitalise on the heritage of the historic County of Ross and Cromarty, both in colour and in symbolism. The shield in the middle of the badge is a retooling of the Ross and Cromarty coat of arms. The three lions rampant are taken from the old Earldom of Ross. The stag’s head is taken from the arms of the MacKenzies of Kintail, Earls of Seaforth. The flaming beacon is taken from the crest of the MacKenzies and the arms of the MacLeods of Lewis.

Unintentionally, my home shirt redesign resembles a hybrid of the traditional Ajax and Paris Saint-Germain home strips. I find the red and dark blue striking. The away shirt is inspired by original Ross County home strip used from 1929 to 1939. I also employed a stag’s head for the away badge, inspired by the County badge in use from 1953 to 1959, and then again from 1982 to 1987. 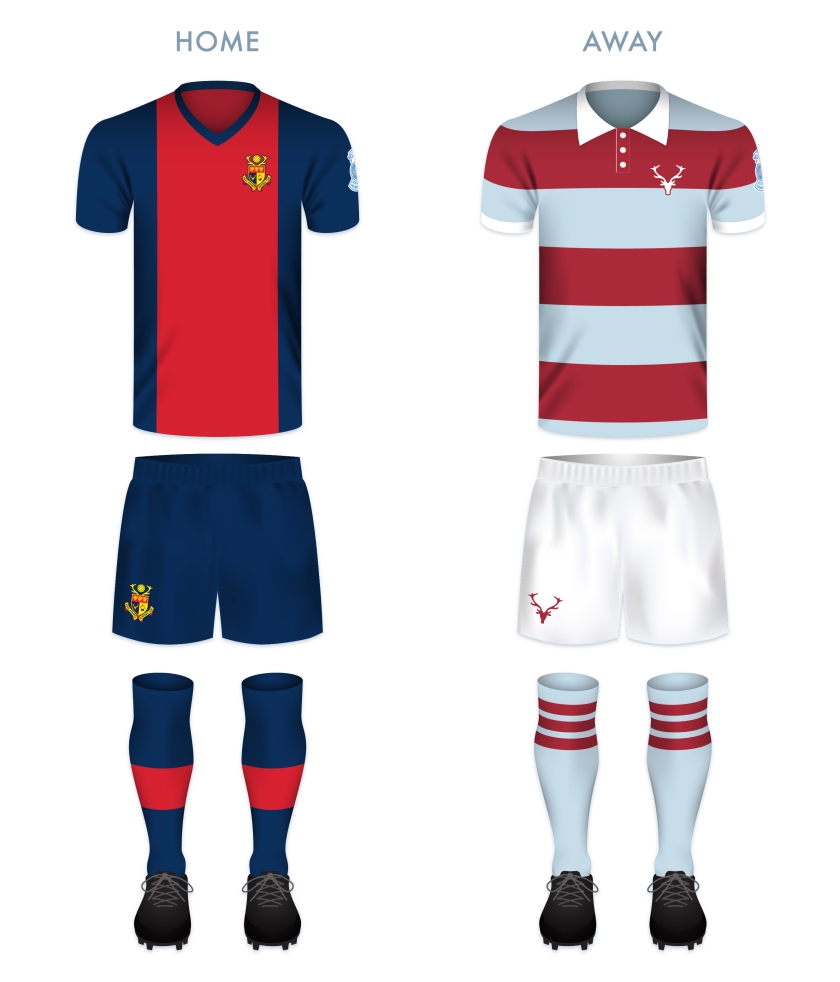 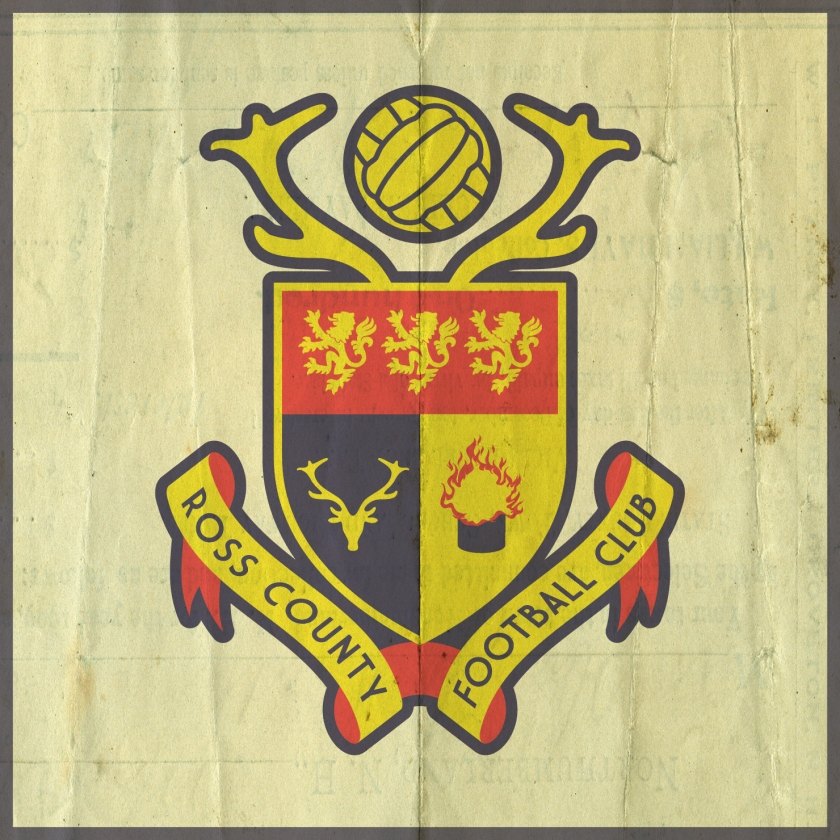 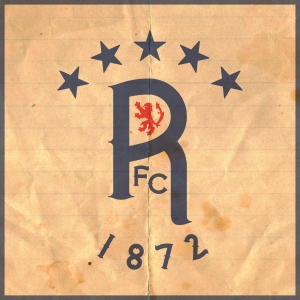 In February 1872, brothers and avid rowers Moses and Peter McNeil met with fellow rowers Peter Campbell and William McBeath at Flesher’s Haugh (now part of Glasgow Green), on the northern bank of the River Clyde. It was not rowing that monopolised their attention that morning, but the spectacle of a group of men playing football on the green. Their imaginations were captured and they decided that they would turn their energies to organising their own football team.

Since 1868, Charles Alcock, founding member of the Football Association in England, had been publishing the The Football Annual. While reading the latest Annual, Moses McNeil came across the name Swindon Rangers, an English rugby club. It is from this club that McNeil drew inspiration for his new club’s name. In May, Rangers played their first-ever match, resulting in a 0-0 draw against Callander FC (1872-74).

In these early years, prior to the founding of the Scottish Football League in 1890, Rangers showed themselves to be fierce competitors. Over the next 122 seasons, the club secured the Scottish championship 54 times, more top tier championships than any other football club in the world (as of the end of the 2018/19 season, Celtic, who are on pace for a record-tying nine league championships in-a-row, have amassed 50).

The recent hardships faced by Rangers are no secret in Scottish culture. In 2012, the club entered into administration and was eventually liquidated, with the assets of the club transferred to a new company. Although this reformed Rangers club was unable to regain its place in the top tier, they were accepted into what was then the Scottish Football League (now the Scottish Professional Football League) and began a campaign of securing two consecutive division championships, before stalling in the second tier until the end of the 2015/16 season, when Rangers won the second tier (the Scottish Championship), gaining automatic promotion to the top tier, where they have competed ever since.

Rangers did not incorporate a badge on their kit until 1968. When they did this, they chose a design featuring intertwined club initials. The earliest use of this design was featured in the 1881/82 season ticket. (Another design, which has never featured on a kit, includes a lion rampant and the club motto, ‘READY’. The earliest version of this design was used in 1959.) In 2003, following their fiftieth top tier championship, Rangers added five stars (one for each ten championships) to their badge.

I found this redesign especially difficult as I consider the ‘RFC’ monogram badge to be an outstanding design. But this personal project of rebranding Scottish football clubs has never been about abandoning the old. Instead, it’s an exploration of history and a personal challenge to try new things.

For the rebrand, I designed a typeface inspired by late-nineteenth century aesthetics. I opted to make all five stars the same size, to include the lion rampant as well as the year of Rangers’ founding. It’s nothing too frilly, but clean, simple and traditional. 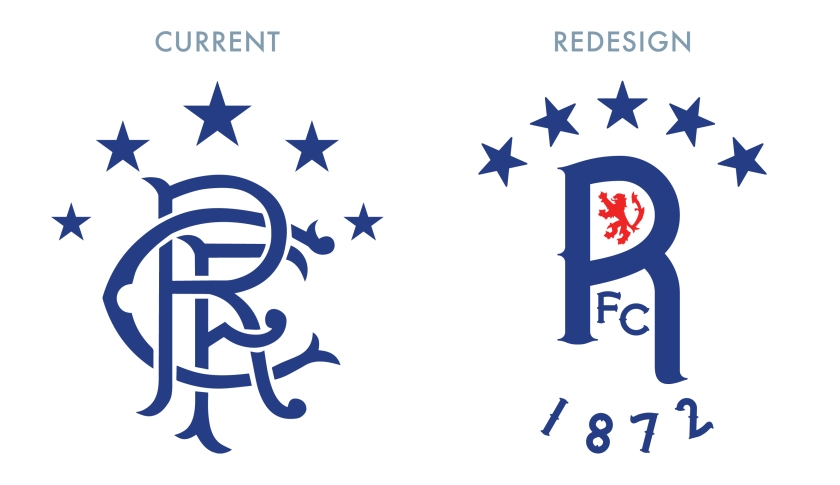 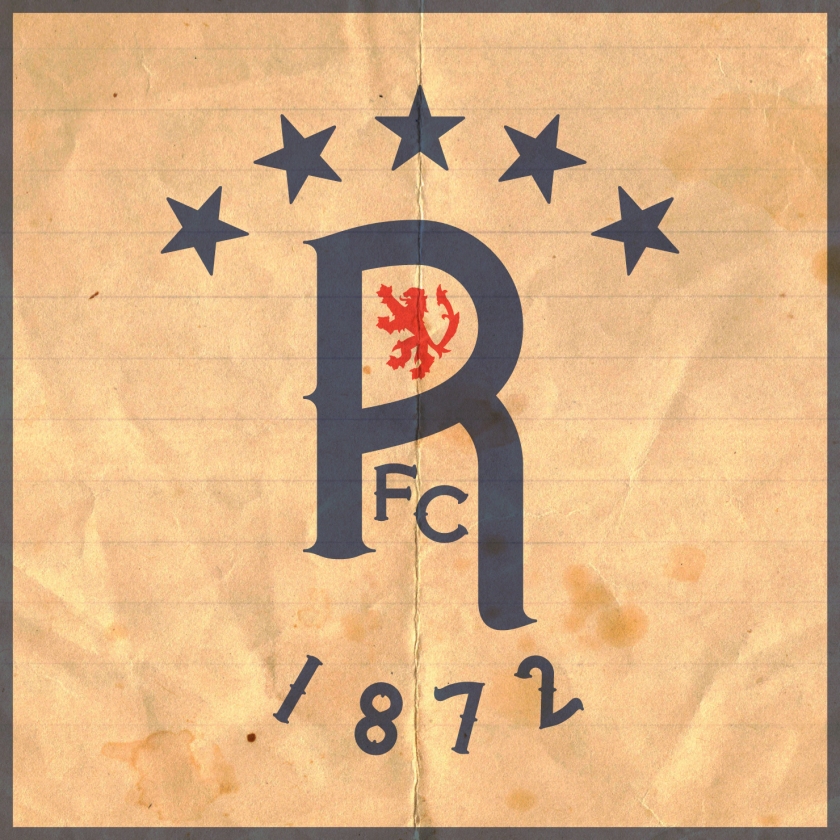