Established in 1879, Montrose Football Club were founding members of the Forfarshire Football Association in 1883. It would be another 40 years before Montrose would join the ranks of the Scottish Football League. Since that time, the club has been been hacking away in the lower leagues of Scottish football with little to show for it apart from local cup victories (they are ten-time winners of the Forfarshire Cup) and a handful of appearances in the later stages of the Scottish Cup and Scottish League Cup.

Despite a history of many disappointments, the 2017/18 season was strong for Montrose, with the club finishing at the top of the Scottish League Two table, thus gaining promotion to League One (Montrose’s first departure from the bottom tier since the 1995/96 season). This is all the more significant due to the fact that only a few seasons earlier, in 2014/15, Montrose narrowly avoided losing their place in the Scottish Professional Football League by defeating the Highland Football League champions, Brora Rangers in a play-off.

Except for different versions of the club’s initials, the current badge, introduced in 1990, is the only badge that Montrose has ever used. This features a rose (from the folk etymology of Montrose, ‘Mount of Roses’), a football, the club name and the date of the club’s founding.

I first attempted to redesign the Montrose badge in 2014. For this initial redesign, I drew inspiration from a badge that was used for only one season (1973/74), featuring an ‘M’ flanked by an ‘F’ and a ‘C’. In this initial redesign, the diagonal strokes on the ‘M’ meet well below the baseline. In addition to the very deep crotch on the ‘M’, I decided to add the rose and the date of the club’s founding to create a stronger sense of centrality. This initial redesign, on the left below, was published on 3 November 2014: 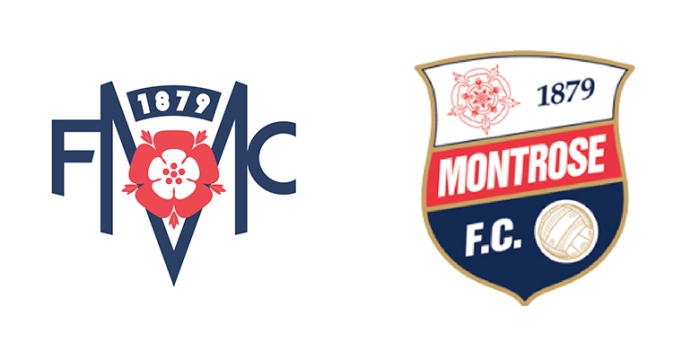 I was quite sold on my 2014 redesign, but I thought that I ought to challenge myself further in this round by tackling the badge from another angle. Using the same rose motif, I constructed a round badge, with the rose superimposed over a football. I was aiming for clean and basic with this design. 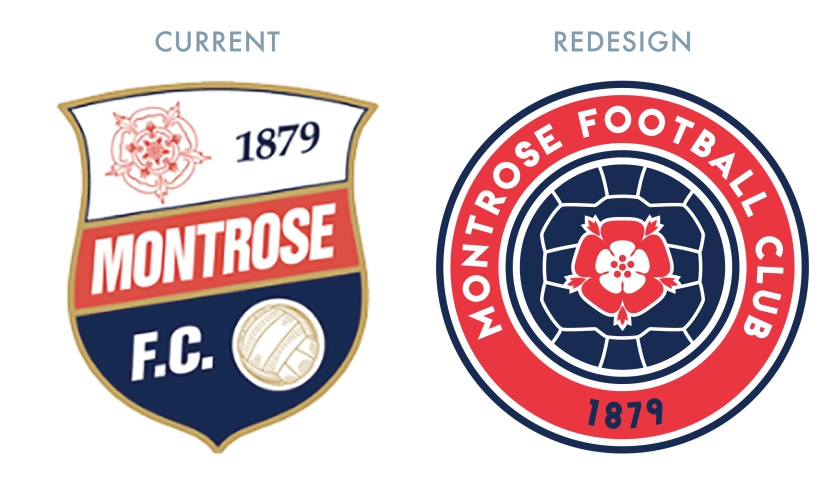 The home kit is inspired by Montrose kits from 1959 to 1970. The away strip makes use of the colour scheme of the badge, dominated by red. The shorts for both kits feature only the central badge image of the rose superimposed over the football. 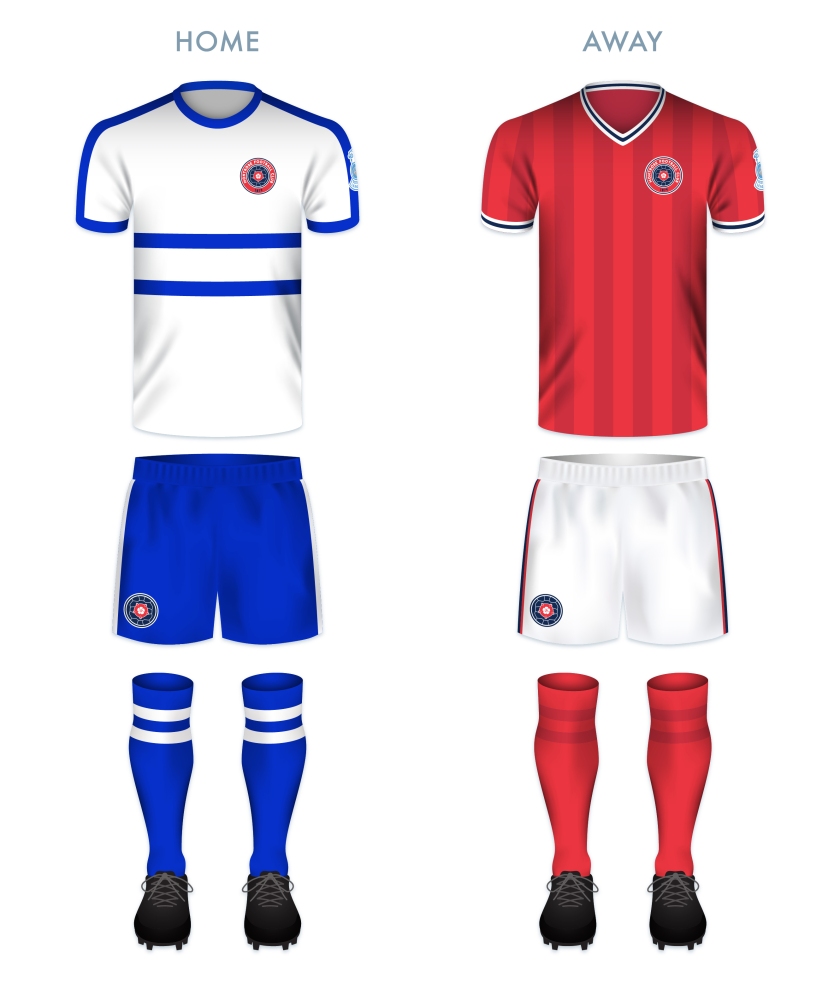 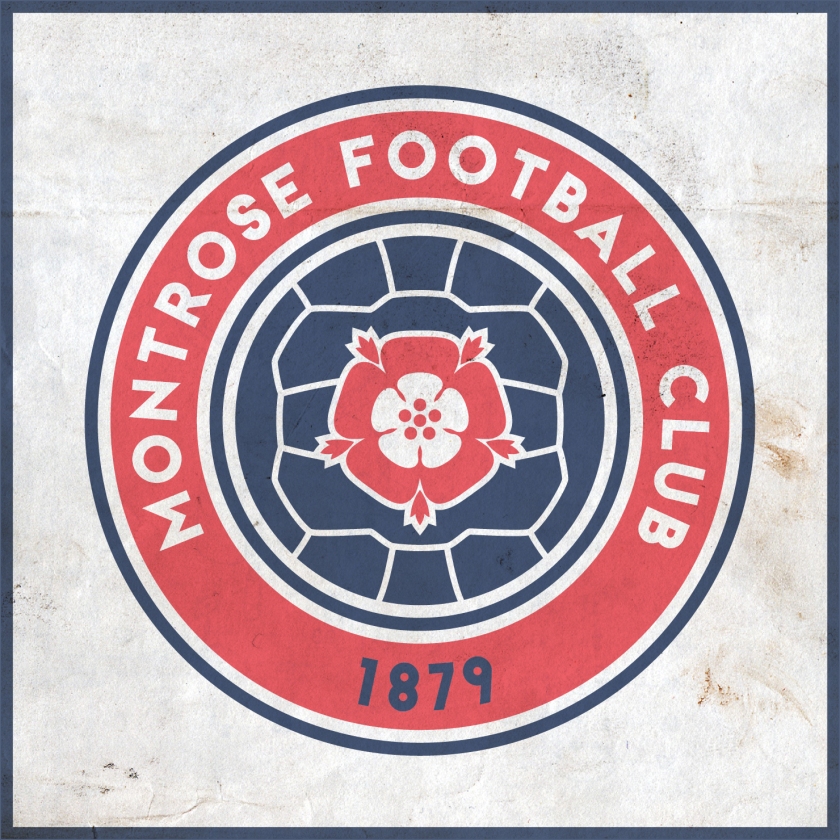 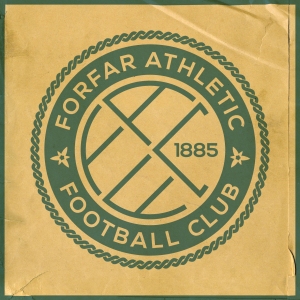 Since joining the Scottish Football League for the 1921/22 season, the Loons have competed in the professional game in Scotland, but have yet to reach the top tier. Their best Scottish League Cup and Scottish Cup performances came in the 1977/78 and 1981/82 seasons, respectively. In both competitions, the Loons reached the semi-finals, where they lost to Rangers on both occasions. The first was a 5-2 loss in the 1977/78 League Cup, which Rangers would go on to win. In the 1981/82 Scottish Cup, Forfar Athletic forced a replay against Rangers after a 0-0 draw. Unfortunately for the Loons, the replay resulted in a 3-1 loss and the club would go away empty-handed once again.

The Loons’ 1960/61 shirt featured a badge consisting of the four heraldic symbols of the former royal burgh of Forfar within a shield: a Scots fir tree, a bull’s head, a stag’s head and a depiction of the former Castle of Forfar with three towers. A round badge featuring these symbols without a shield came into regular use in 1980. Some version of this badge has been used ever since, with the current badge, in use since 2007, placing the heraldic symbols within a shield once again.

For my redesign, I considered working with the current badge, but decided that, as these symbols are so far removed from the people of Forfar (the castle being destroyed in 1313), I would go another route. This began with a sketch of a highly-stylised, round monogram. Eventually, I placed the monogram within a ring. The outer ring contains two jute plant flowers, a reference to the contribution of the jute industry to the growth of the town in the nineteenth and twentieth centuries. The textile theme is recalled once again by the knot that borders the badge.

For the home strip, I went with the Loons’ classic light blue colour scheme. This particular rendering is inspired by the kits used between 1983 and 1986. The away strip is inspired by an odd move for the club. Between 1955 and 1967, Forfar Athletic departed from their traditional blues in favour of a green home strip. My design draws mostly from the kit used from August to December 1967, but with vertical stripes composed of a diamond pattern.

Thank you to Forfar Athletic supporter David Carnegie and to Dave at Historical Football Kits for some of the historical information used above.

Arbroath Football Cub was established in 1878 and as early as 1885, their shirts featured a badge consisting of a golden portcullis sewn into a large shield, representing the entrance to the ruined Arbroath Abbey (famous, in part, for its association with the Declaration of Arbroath), derived from the Arbroath coat of arms. That same year, Arbroath boasted a victory of 36-0 against the now-defunct Aberdonian side Bon Accord FC (who competed from 1884 until 1892), the largest margin of victory in world football until 2002 (the current record of 149-0 between Malagasy sides AS Adema and SO l’Emyrne was thrown, with SO l’Emyrne scoring 149 own-goals in protest to a previous refereeing decision made which saw them out of contention for the Malagasy title).

During their years in the SFL, ‘the Red Lichties’ have advanced to the semi-finals of the Scottish Cup and Scottish League Cup on two occasions. In the 1946/47 Scottish Cup, Arbroath triumphed over Stenhousemuir, Raith Rovers and Hearts before losing 0-2 to Aberdeen, who would go on to win the tournament. Arbroath reached their second major cup semi-final in the 1959/60 season, losing 3-0 to Third Lanark.

At the end of the 2018/19 season, Arbroath finished at the top of the League One table, securing promotion to the Scottish Championship (the second tier) for the first time since their relegation to the third tier after the 2002/03 season.

For several periods from 1953 until 1992, the Arbroath kit featured some variation of the club initials, sometimes in a shield. In 1980, a single colour version of the current badge saw regular use. This badge was updated with light blue and yellow in 1992. In recent years, the colours have been more in line with the 1980 version.

I have always been impressed with Arbroath’s 1992 badge. I would commend its timelessness, if not for the dated typeface and colours. For my redesign, I stripped the shield away and retooled the portcullis so that it forms something similar to a traditional Iberian shield found in some historical depictions of the Arbroath coat of arms. I also swapped the typeface for something more Romanesque, recalling the historical significance of the town.

The Arbroath home shirt first featured in maroon in 1882. Typically, this was accompanied with white details and shorts, not dissimilar to Hearts kits over the years. Arbroath first used a fully maroon kit in 1997 (Hearts did not use this scheme until 2002). I decided to capitalise on the attractive look of a fully maroon kit, with light blue details. My redesigned away kit is dominated by this light blue, with black shorts and details. 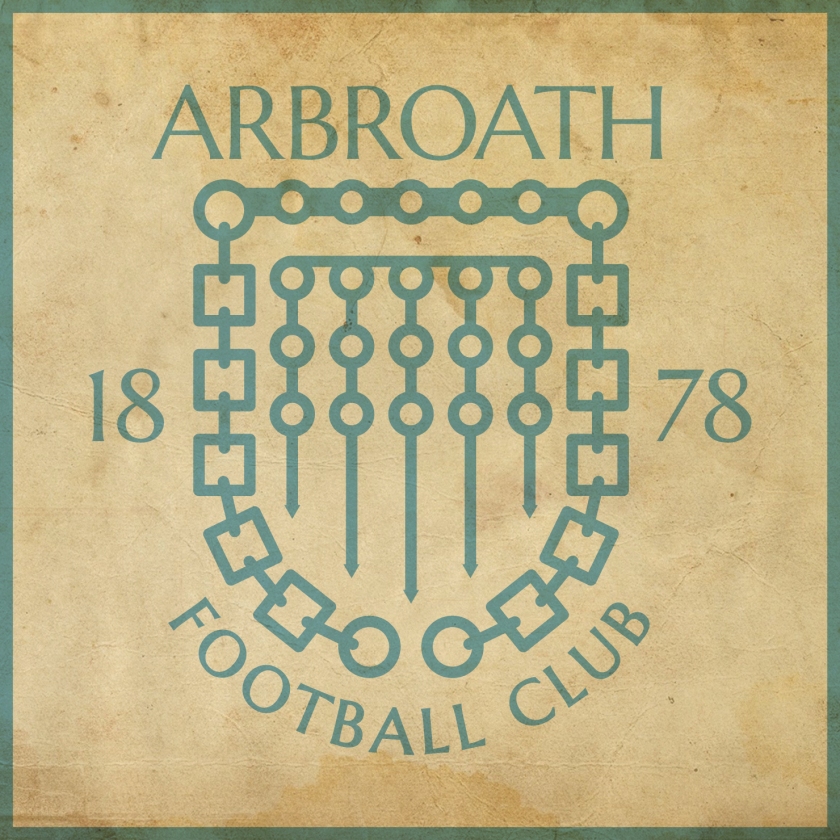 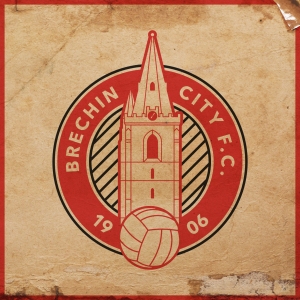 The 2017/18 season was unpleasant for Brechin City Football Club. They finished at the bottom of the Scottish Championship table, having failed to win a single match and having amassed only four points from four draws. The following season, in League One, Brechin City was able to amass 36 points (9 wins, 9 draws, 18 losses), but this was not enough to save the club from their second consecutive relegation.

Brechin’s woes continued in the 2019/20 season, when they finished at the bottom of the League Two table. This and the following season were cut short due to the COVID-19 pandemic, and despite having finished at the bottom of the table in their first season in League Two, promotions into and relegations from the league were suspended. Unfortunately, the 2020/21 season spelled the end of Brechin City’s run in the SPFL, finishing at the bottom of the table again and losing a two-leg play-off 3-1 to Lowland League champions Kelty Hearts. As a result, Brechin City were relegated from the professional league for the first time in 67 years and will compete in the Highland League for the 2021/22 season.

Not wanting to add insult to injury, here is a badge redesign with which I can say that I am pleased.

Brechin City FC was established in 1906 by players from two Brechin-based junior sides (Brechin Harp and Brechin Hearts). The club name, ‘Brechin City’, derives from an historic designation of Brechin as a ‘city’, the result of the presence of its medieval cathedral (which dates from the 13th century). A simple illustration of the cathedral itself (now only a ‘cathedral’ in name as it is home to a Church of Scotland congregation, thus having no bishop) was first featured in the 1985 badge, which was updated to the current badge in 1995. For the 2006/07 season, the Brechin City badge featured different colours and a special centenary banner.

For my redesign, I had originally explored using some of the heraldic symbols of Brechin. While mulling over options, I rendered a simple, but more detailed and accurate illustration of the main tower of Brechin Cathedral than the one used in the current badge. This image took my fancy and I built a simple badge around it, which is seen on the right below. A subtle detail in the redesign is found in the clock, which shows six minutes past seven, or 19:06, symbolising the founding of the club.

For the home shirt, I went with Brechin City’s red (in constant use since 1955) and a black sash with a white border (mirrored in the collar). For the away shirt, I employed a white and light blue harlequin design, which was used in the 1909/10 season.